Air quality standards define clean air. They tell us how much of a substance can be in the air without causing harm, based on proven scientific and medical research. Both the federal and State governments set air quality standards. In most cases, California’s standards are more protective of health. The Attainment Designation tells us whether our air meets these health standards.

Federal standards have been established for seven pollutants:

California state standards exist for all of these, plus four more:

These are the only pollutants – out of hundreds in our air – for which standards have been set. There is not enough known about the health effects of other pollutants to set air quality standards.

Ozone is a gas created when NOx (nitrogen oxides) and VOCs (volatile organic compounds) chemically react with the sun.  Ozone is the primary ingredient of summertime smog.

Ozone is a seasonal problem, typically occurring during the months of May through October. Sources for the pollutants which react to form ozone include motor vehicles, power plants, factories, chemical solvents, combustion products from various fuels, and consumer products.

Ozone occurs in two layers of the Earth’s atmosphere: 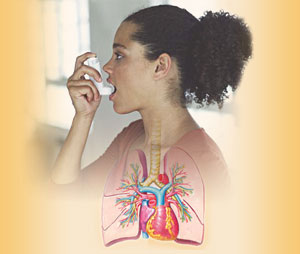 Ozone acts as a strong irritant that attacks the body’s respiratory system. Symptoms include shortness of breath, chest pain when inhaling deeply, wheezing and coughing. When ozone levels are high, people with lung disease (e.g., chronic bronchitis, emphysema, and asthma) are particularly susceptible to adverse health impacts. Other groups that are particularly vulnerable are people with asthma and other respiratory conditions, and people who are active outdoors.

Ozone is an unstable form of oxygen, also known as O3.  Ozone occurs naturally in the upper atmosphere, approximately 10 kilometers above the earth.  Here, “good” ozone makes up the ozone layer, which protects the earth from the harmful rays of the sun.  At ground level, however, the same substance is bad for us.  Ground-level ozone damages human lung tissue, manufactured materials, and crops.  Ground level ozone is formed when nitrogen oxides and reactive organic gases react chemicallyin the presence of sunlight. Nitrogen oxides are produced by motor vehicles and fuel-burning engines.  Reactive organic gases are produced by motor vehicles, solvents, consumer products, and the petroleum industry.

Butte County does not meet the State or the federal 1-hour and 8-hour standards.  What this means, is that on some days we breathe unhealthy air.

Particulate Matter (PM) is fine material, metal, soot, smoke, and dust particles suspended in the air.  For health reasons, we are most concerned with inhalable particulate matter less than 10 micrometers in diameter (PM10), and less than 2.5 micrometers in diameter (PM 2.5).  Particles of these sizes can permanently lodge in the deepest and most sensitive areas of the lung, and can aggravate many respiratory illnesses including asthma, bronchitis, and emphysema. 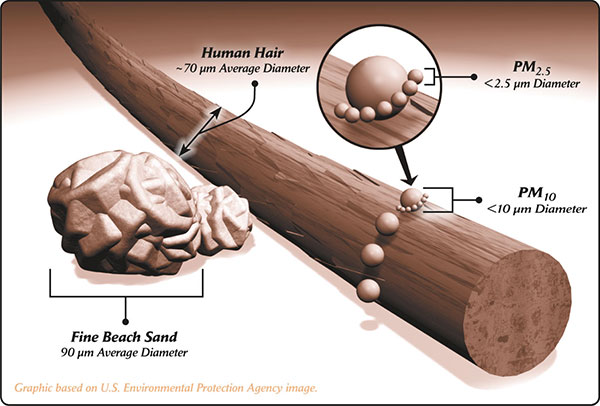 Sources of directly emitted particulates in Butte County include soil from farming, construction dust, paved road dust, smoke from residential wood combustion, and exhaust from mobile sources such as cars and trucks.  The valley can also be impacted by seasonal agricultural burning, usually during the fall.

Butte County was officially designated attainment for the national PM2.5 standard in 2018 after meeting the standard since 2013. For more information – see the Redesignation Request and Maintenance Plan here.

Air toxics is a generic term referring to a harmful chemical or group of chemicals in the air.  Substances that are especially harmful to health, such as those considered under U.S. EPA’s hazardous air pollutant program or California’s AB 1807 and/or AB 2588 air toxics program, are considered to be air toxics.  The BCAQMD is required to oversee implementation of the Air Toxics “Hot Spots” Program, to reduce the public health risk from air toxics.